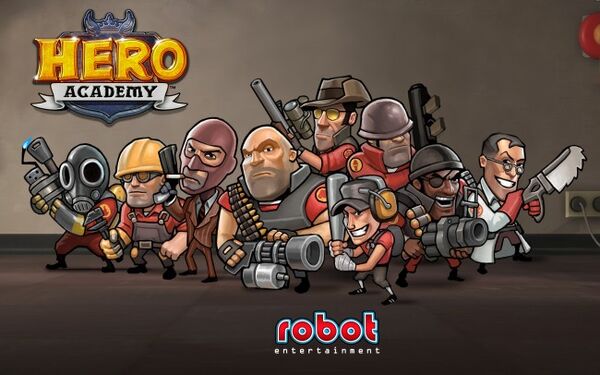 From a distant land and time beyond the Clouds of Vapor, the Team Fortress heroes have taken the Hero Academy field by storm. With a wide variety of heroes and flexible advanced weaponry, they have an answer for any situation and an aggressive playstyle. (Available for purchase exclusively on Steam)

Jarate (X2) - Debuffs an enemy unit, greatly increasing damage taken from next attack. The target's magic and physical resistance are each reduced by 175%.[edit | edit source]

Respawn Token (X2) Can allow a knocked out unit to respawn by putting them back in the selection area. Costs no AP to use.[edit | edit source]

Use a medic and engineer to amplify attack power for your team, as well as heal teammates. Use scouts to stomp enemies, and demo man and soldier to take out large groups with AOE damage. Keep snipers at the back of the board to take people out from afar. Use pyro to take out enemy units with large amounts of health, or to damage a crystal an enemy is blocking. Use the spy to backstab enemy super units and, well, anything you can stab. Use the heavy for his tanking and spray attacks (much like the shotgun wielding dwarf.) and, above all, keep medics and engineers alive.

Retrieved from "https://heroacademy.fandom.com/wiki/Team_Fortress_2?oldid=4591"
Community content is available under CC-BY-SA unless otherwise noted.