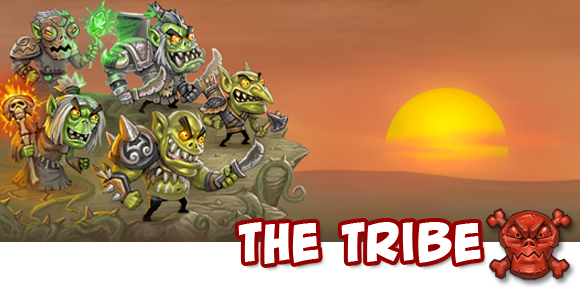 The harsh wastelands are home to the Tribe, a loose federation of fierce warriors led by powerful chieftains. The Tribe lives for battle; when one member falls, his comardes are enraged.

Additional note: Only units already deployed on the field can gain this bonus. Any units summoned after an ally is stomped will not be able to use or consume the bonus.

Multiple stomped Tribe units do not trigger multiple bloodrage bonuses. Once an enraged unit attacks, all units lose the bonus.

Spike armor does not act like armor as you might think. True, it give the unit it is equipped on an extra 10% health, but its main feature is that whenever damage is dealt to the unit which has spike armor equipped, one third of the damage taken is also taken by the enemy unit.(e.g. If 300 damage is taken, the enemy will take 100)

Heals a single unit for 700 health, and increases the next attacks power by 175%

Retrieved from "https://heroacademy.fandom.com/wiki/Tribe?oldid=4605"
Community content is available under CC-BY-SA unless otherwise noted.